Jon King doesn’t stop. You wouldn’t know it to talk to him – the CEO of Synovia Solutions is a 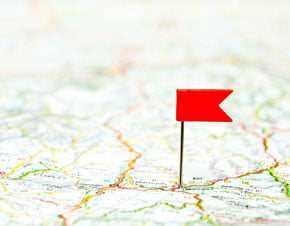 calm and considered man, speaking only after taking a beat to think and choose just the right thing to say. But in his work, King is constantly moving, and that’s just the way he likes it.

“If I’m going to work, I want to do something where you can impact change quickly,” King said. “I’m an action-oriented person, I like to look at things and analyze things, make a decision and get on with it.”

That active style is something that he’s brought to Synovia since his arrival in 2011. He’s the kind of executive who’s not only participating in the actual business of his company, but who you’re excited to see involved in new projects. That’s not just because of his years of experience. It’s because the things Jon King gets involved in tend to be successful.

ACTIVE LEADERSHIP, INSIDE AND OUT

King’s somewhat of an expert in management, both of a business as a whole and of people who work there. Part of that comes from a career that’s spanned a number of industries, businesses from start-ups to Fortune 500 companies, and a tour of military service. He’s experienced all kinds of different styles, and he’s worked in management at all levels since early in his career with Xerox.

“The first management job I had, I was no more ready to lead ten people than I was to land a man on the moon,” King said. “I learned lessons that have stayed with me throughout my whole career, and I’m thankful every day for the time I spent there.” It’s easy to see why. Today in addition to his work at Synovia, King is a guest lecturer at Butler University, IUPUI, and the Kelley School of Business at Indiana University.

King also learned about the importance of direct involvement in a team or a company you run, and along with his natural tendency toward action, it leads not only to an active internal role, but also to hands-on interactions with customers. “If you buy a piece of software and you don’t know how to use it, it’s worthless, a waste of money,” King says. And that’s why training users is a critical part of Synovia’s sales and service process. “It’s pretty obvious, but it’s not as widespread in its application as you might think. At the end of the day, if we don’t make it happen, they won’t get all the value that they’re paying for.”

That training isn’t something that gets handed off to an outside firm, or an online walkthrough. Synovia senior management – including Jon King himself – meet with top clients face-to-face twice yearly to review in-house training, software usage, and any other training and functionality issues a client may have. Clients know that Synovia buys into their success because the executive team buys into them.

That emphasis on openness means that Synovia has an ability to change and a flexibility that you just don’t often see in a corporate setting. King has the experience to know what works, know what doesn’t work, and build on that. In just a few years under King’s guidance, the pricing model Synovia Solutions – and now the industry as a whole – offers to school districts has been totally revolutionized. King has also helped to build partnerships with companies to get software to market faster, and he shepherded the debut of the game-changing Here Comes the BusTM website and app for parents, students, and schools. All major changes, and all have fueled the growth that Synovia has seen in recent years.

The major source of that growth has been in school bus fleet management, in large part because of those innovative changes. The now-abandoned previous pricing model put a significant burden on the client, with large up-front charges that increased with the size of the fleet. Schools simply couldn’t afford it. Business wasn’t growing. So a change, spearheaded by King, was made. “You’re buying a service from us,” King said. “At the end of the day you’re buying information from us. We’re not a hardware provider, we’re an information provider.” So having clients pay for hardware didn’t really make sense.

Now rather than a large up-front fee, there’s no up-front costs at all. Schools pay only a monthly subscription per vehicle. Synovia changed how the product went to market, and also added partnerships with Verizon for data transmission and Blue Bird Corporation, who wanted to associate their new GPS accessory with a trusted brand. “It was a perfect marriage,” King said. “That model was embraced by the market, and it changed the whole paradigm.”

Synovia’s growth in the K-12 market has been powered not only by those changes, but also by purely new innovation. The Here Comes the Bus app is part of the crest of that wave. “It’s another differentiator for us in that space,” King said.

Here Comes the Bus is a totally different thing from what other competitors are offering to schools, and that makes it a massive difference-maker for Synovia. But it’s not just the app itself that is making a difference – it’s the app’s audience.

Until Here Comes the Bus, all of Synovia’s services have been aimed at businesses, not at individual consumers. But since Here Comes the Bus is an app for parents, rather than for school administrators, it’s a new audience for Synovia’s products. “It’s educational, we’re learning, but at end of the day we think it’s going to be a game changer on several fronts,” King said. It’s just another reason for schools to want to work with Synovia, and for the schools that work with us to continue to do so for years and years. “In the world we live in today, where security and safety are even more important to parents, it’s big,” King says, as it acts as part of a holistic set of tools for schools and parents to make sure kids get to and from school safely every day.

That new experience for Synovia is part of what Jon thinks will help the company as it expands its role in other fleet management verticals. “The biggest opportunity [for Synovia] is in the private sector, in the specific verticals that don’t require changes to our technology,” King said.

King envisions identifying the private fleets that can use GPS technology and software to the greatest level of effectiveness and developing game-changing products and services for them to mirror the success of Synovia’s K-12 vertical.

Sectors like construction fleet management are the next big targets for Synovia Solutions, and specifically King thinks that concrete and cement transportation are specific disciplines where Synovia can do a lot of good. It’s critical for vehicles to be able to make it from the mixing site to the construction site before the material sets, and GPS tracking allows fleet managers to plot the most efficient routes to guarantee that material isn’t lost needlessly. “That’s a big opportunity and we’d like to think we can provide a solution,” King said.

New growth has to be managed intelligently, though. When pushing Synovia forward, scalability was top of mind for King. That’s part of what prompted his search for partnerships in the K-12 sphere. “We were never going to have a sales organization big enough to get to the market quick enough,” King said.

Balancing growth against smart investments in infrastructure, and building partnerships to cover gaps rather than spending big to fill them, all fit together as part of an intentional strategy. “To [manage growth carefully] with a small business is extremely critical because you don’t have an unlimited checkbook,” said King.

When a company enters into a partnership with Synovia, whether as a client or as a service provider, you’re working with a company that reflects its chief. Expect action, expect innovation, and expect success. Expect that, like Jon King, Synovia Solutions will not stop.